Displays of pumpkins, mums, and corn stalks in front of a homes and businesses have become as much a part of fall as pumpkin pie and falling leaves. For Hannah York of Caldwell County FFA, these displays have grown into an award winning business!

In 2014, Hannah talked to a few businesses between her home and school about constructing fall displays for them. After a few said yes, she contacted local farms that produced pumpkins, corn, and straw and arranged to buy from them at wholesale prices. The first year, she sold 19 displays and earned over $1000 in profit. She also seized the opportunity to sell bundles of corn stalks to retail outlets to increase the scope of her business.

Word about the quality of Hannah’s work spread through the community and in 2015 she was up to 30 fall displays and sold over 80 bundles of corn stalks. But as her business grew, Hannah soon learned that time management was a key element of her business. According to Hannah, “There is a about a two week window when businesses want their fall displays set up. Between school and cheerleading it was tough to get all the displays constructed.” Hannah learned that by loading her trailer efficiently the night before she could get more done in the afternoon.

Hannah has been creative in both the construction and marketing of her displays. She traded the construction of a display at the school football homecoming for the cost of a yearbook. She got great publicity out of the display and then was able to reuse the display items for a paying customer. In 2016, Hannah was asked to construct a huge display for the local hospital that focused on breast cancer awareness. She used pink pumpkins and complimented them with purple and white mums. The hospital was so pleased with the display that they set up lights so that if could be viewed at night! 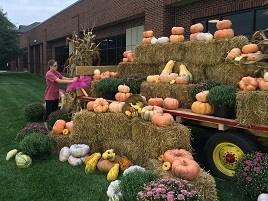 Hannah has developed many skills through her project. First, she has learned that quality matters. By choosing mums still in the bud stage, polishing pumpkins, and returning to water mums when there is no rain, she has managed to produce displays that last throughout the fall season. She has also learned how to work with customers to determine their needs. She developed her own pricing sheet so that she could accurately track customer orders. Accurate and complete financial records helped Hannah track income, expenses, and profit and make adjustments to her pricing structure for future years.

In 2016, Hannah constructed 35 fall displays, sold 40 bundles of corn stalks, and expanded her business to include “freedom displays.” She sold 18 painted pallets and a few tobacco stick crafts prior to the July 4th holiday. All told, Hannah has earned over $4000 in profit through her business.

In October, Hannah was recognized as the National Winer in the Agriculture Sales Proficiency Area by the National FFA Organization. She was selected as one of four national finalists based on a written application and then competed in an in depth interview before a panel of agriculture business people.

While the honor was much appreciated and the money has been nice, Hannah is most proud of the communication and business skills she has learned. “The success I have experienced has built my self-confidence and made me a recognized face in our community. I know I can use these skills throughout life.” 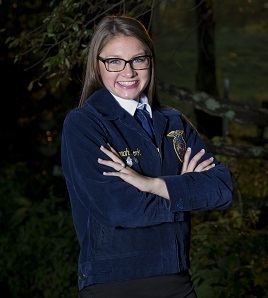