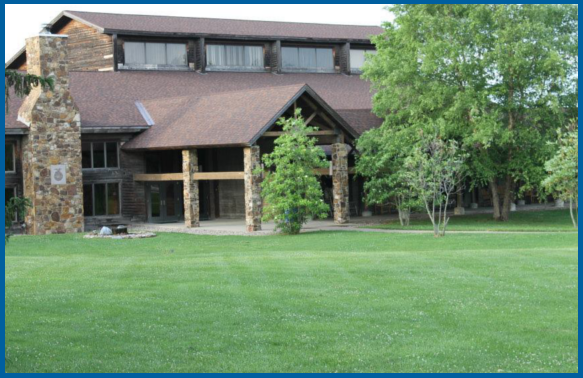 The Kentucky FFA Leadership Training Center began as a dream of the Kentucky Vocational Agriculture Teachers Association (KVATA) soon after Kentucky FFA was formed.  Leaders of KVATA visited several sites across the state before settling on a former Civilian Conservation Corps (CCC) camp near Hardinsburg in Breckinridge County.  Individual members of KVATA personally paid an assessment to purchase the property and buildings.

According to one early camper the main job the first year of FFA Camp was spent clearing brush and improving the facilities.  The old CCC barracks, kitchen, and bath house continued to be used through the mid 1950’s.  Video from the early days of FFA Camp show campers engaged in morning calisthenics and recreational activities such as boxing.  A swimming pool was added in the mid 1940’s and became the first swimming pool most of the farm boys ever saw.

Beginning in the early 1950’s a capital campaign began to raise the funds necessary to replace the old CCC buildings with modern cottages and classrooms.  FFA chapters solicited funds from community members and the new buildings were paid for with thousands of 25 and 50 cent donations.  Various companies also donated to the cause and the new facilities included a state of the art dining hall, administration building, classroom building, bathhouses and twenty cottages.  Breckinridge County native and State Representative Walter Moorman was instrumental in the fund raising efforts and was honored by having his portrait hung in the Old Administration Building lobby.

Throughout the next three decades, the FFA Leadership Training Center continued to thrive as FFA members from across the state came to receive leadership development training.  In addition to hosting several weeks of FFA Camp each summer, the Leadership Training Center was the site of the Kentucky Vocational Agriculture Teachers Conference each summer and began hosting a camp for the Future Homemakers of America as well.

In the summer of 1970, Mr. Robert “Woody” Cox of Bourbon County FFA brought the first female FFA members to FFA Camp.  In the years since, female members have made up an ever increasing percentage of total attendance at the LTC.

Thanks to the efforts of State Senator Joe Wright, in the early 1990’s the Kentucky Legislature approved funding for a new administration building and dormitory facility.  These buildings included a large auditorium, four classrooms, a small kitchen, office space for the LTC staff, and twelve climate controlled sleeping rooms.  These buildings were dedicated on June 14, 1994 and allowed the facility to be used for events on a year round basis.

As FFA Camp participation grew steadily from 1185 in 1994 to 1568 in 2008, it became apparent that the facility must be improved again.  Thanks to the support of Kentucky Farm Bureau and the work of the Kentucky Vocational Agriculture Teachers Association, $2 million was appropriated by the Kentucky General Assembly to renovate the dining hall.  Governor Steve Beshear helped break ground for the renovation and expansion project in the summer of 2010 and First Lady Jane Beshear officially opened the dining hall in the summer of 2011.

The Kentucky FFA Leadership Training Center has been a success because of the dedication and support of hundreds of individuals through the years.  From the early Teachers of Agriculture who donated a portion of their salaries to purchase the land to the farmers who donated a quarter of their hard earned money to build the “new” cottages in the 1950’s, the Leadership Training Center has received unparalleled support from the people it serves.  The LTC has also been blessed with dozens of dedicated staff members who have devoted their lives to serving the FFA members of Kentucky.

Over 80 years after it was founded, the Kentucky FFA Leadership Training Center continues a legacy of training FFA members to be leaders in the agriculture industry.

The Kentucky FFA Leadership Training Center is available for use by agriculture, educational, and community groups and provides the perfect location for retreats, meetings, and conferences. The facility is not available for weddings, family reuinions, or political events.

Our year round facilities include:

Our seasonal facilities include:

For availability and pricing information, email josh.mitcham@education.ky.gov or call (270) 756-2301.